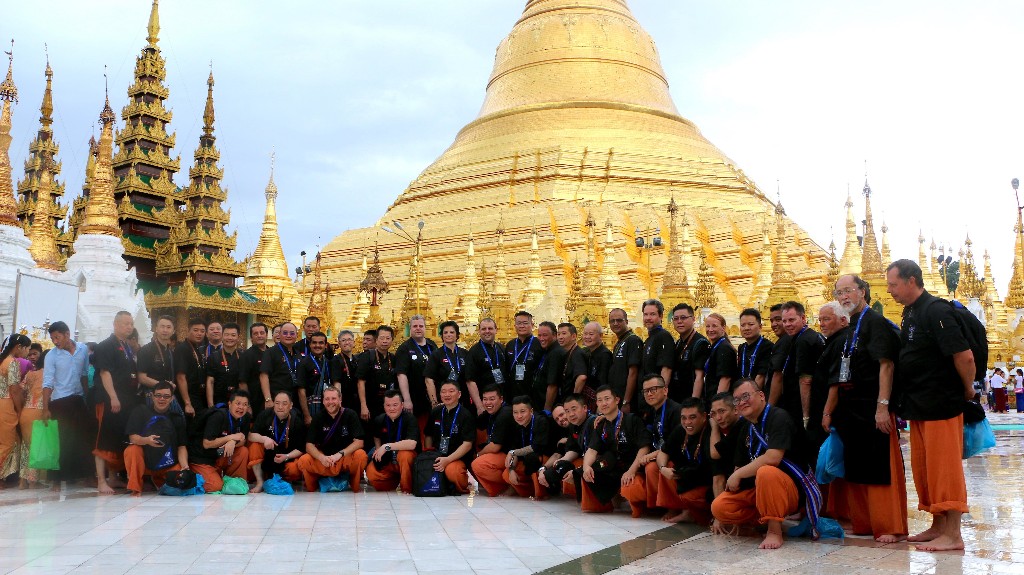 The World Chefs Without Borders (WCWB) Myanmar Tour for Humanity recently took place in Yangon as its 1stChefs Social Responsibility global event on the 10th Anniversary since Cyclone Nargis.  60 Chefs from 22 National Member Societies of the World Association of Chefs Societies (WORLDCHEFS) travelled to Yangon at their own expense to raise funds together with the Myanmar Chefs Association www.myanmarchefs.com and cook for zero hunger in a world where humanity must come first.

WCWB Chairman Willment Leong stated “Chefs may not be able to change lives, but with our Chefs Social Responsibility initiative, we can make a difference. Convert your ego to sharing and it will make you not only a great Chef, but also a great person.”

The first community event on the WCWB Myanmar Tour for Humanity organized by Chef Oliver E. Soe Thet, President of the Myanmar Chefs Association was held at the Shwedagon Pagoda, the most sacred Buddhist pagoda in Myanmar, where the Chefs prepared and distributed 4500 meals to the local community.  It was the first time this type of event was approved by the Yangon State Government and was strongly supported by the Union Hotels & Tourism Ministry.

The Tour continued by boat on the Ayeyarwady River Delta. When they landed in Twantay City, the Chefs were greeted on the pier by Abbot U Yi Wa Ra Seyadaw with 150 orphan children of the Dhamma Linkara Monasteryand 50 students accompanied by Mr. Zaw Kyi, a Free School teacher & philanthropist. Stationary packs with school supplies and dry food relief packs were distributed to the children, and the Chefs purchased vegetables from the local market to encourage its economy and then prepared meals on the boat for the villages ahead.

Thousands of villagers and children from 20 villages gathered together between Napyaw su Village and Ka yin Kyaung Village to welcome the Chefs and show appreciation for their humanitarian efforts. In addition to the 10,000 meals prepared and provided to the villagers and children, sporting items and WCWB teddy bears were also shared. A total of 8100 dry food relief packs was distributed throughout the day by the Chefs.

As a finale to the boat trip, the Chefs released 50,000 young milk fish in the Ayeyarwady River Delta near Ka yin Kyaung village to help replenish the food supply for the years ahead.

WCWB acknowledged the 12 local labourers that assisted in the delivery of the dry food relief packs during the Tour by recognizing them as VIP’s and awarding each a WCWB Medal of Humanity during the WCWB Myanmar Tour for Humanity Farewell and Appreciation Dinner.

Myanmar Chef Association President Oliver E. Soe Thet shared the country’s appreciation with the Chefs, “The Myanmar people in Yangon, the Delta and throughout the Nation, are proud and thankful for the efforts and support of World Chefs Without Borders, in particular the 60 Chefs from 22 countries that came together and initiated such a once-in-a-lifetime event in Yangon and Nargis Delta.”